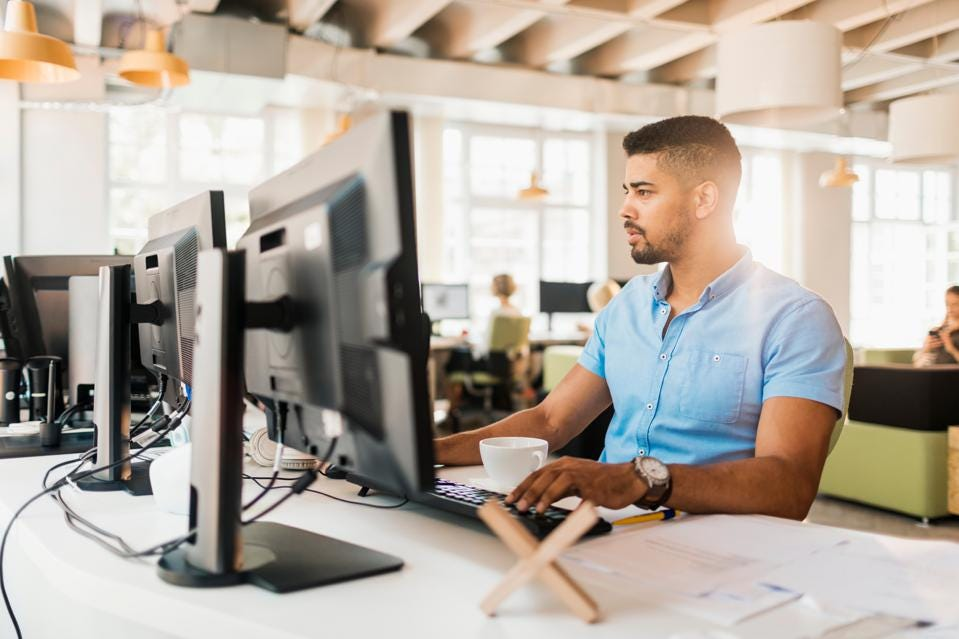 How to Become a VR/AR Software Engineer in 2022

Do you like working with cutting-edge technology? Is reality boring and you’re convinced you could make a better one? Then a career as a VR/AR engineer may be for you!

VR and AR technology, and the industry surrounding it, have both rapidly advanced since 2020. Major tech players have invested billions into immersive tech, and some even rebranded accordingly. While some things have remained constant, many aspects of the industry have changed significantly over the past two years. Here's how you can break into the industry as a VR/AR engineer in 2022.

Although VR and AR have fully entered the public consciousness in recent years, it’s still helpful to clearly define what's what in the world of immersive technology. Software engineers in this field usually specialize in a particular platform or device, so it’s important to know exactly what each specialization offers. Moreover, new terms like XR, MR, and the metaverse have joined the lexicon alongside VR and AR. Understanding these terms should help you decide which direction you want to move toward in the expanding VR/AR industry.

Mixed Reality blends physical and virtual elements to create a seamless, interactive environment. MR is often mistaken for an extension of Augmented Reality, but it is a bit more complex than that. Instead of overlaying digital content on physical objects like AR, Mixed Reality merges virtual and physical worlds into a single cohesive experience.

Extended Reality is simply the concept of enhancing our reality with technology. XR describes how we use technology to create unique experiences and environments. It is essentially an umbrella term encompassing VR, AR, and MR, all of which transform the physical world in various ways.

The metaverse is a simulated 3D environment based on VR, AR, and blockchain technology combined with aspects of social media. It is an immersive virtual space where people interact, socialize, and conduct business via their own personalized avatars. XR technology aims to bring users into a virtual world, and that virtual world is the metaverse.

If you want to start a career as a VR/AR engineer, it is also important to understand the current state of the VR/AR industry. The industry has grown dramatically over the past two years, supported by significant advancements in VR/AR technology. It’s not uncommon for tech and industry to expand in tandem, so getting a general sense of both the technology and the industry today is crucial for starting your career as a VR/AR developer.

The major technological advancements revolve around size and affordability. Just as computers used to occupy an entire room and now fit in your pocket, VR/AR technology is being sized down for practical consumer use. LiDAR, for example, was historically "too bulky" and "too expensive" for widespread adoption, but companies like Apple are now incorporating LiDAR into their mobile devices to enhance AR capabilities.

VR headsets are becoming similarly accessible, both physically and fiscally. DJ Smith, CCO and co-founder of The Glimpse Group, noted that the most surprising technological development is "having [the Oculus Quest 2] in my hand for $299." Affordability is a crucial requirement for mass adoption, and VR/AR hardware's newfound accessibility is perhaps the most impressive development in recent years. "Even in 2018, you needed a $2500 computer and a wired headset," DJ observed, "but today there are self-contained wireless VR headsets available for a reasonable price.”

As the tech has advanced, the VR/AR industry has expanded in lockstep. The XR market, valued at $26.05 billion in 2020, is expected to reach a value of $463.7 billion by 2026. Major tech corporations such as Meta, Google, and Apple are pouring resources into XR development and poaching XR talent from one another, driving up the value of XR development skills.

Non-tech businesses are quickly becoming aware of XR's importance as well. According to one survey, 75% of business leaders plan to incorporate VR and AR tech into their business plans by 2023. The pandemic foregrounded XR technology as a way to bridge physical distance for employees and consumers alike, further accelerating development. Business leaders across every industry are realizing the importance of incorporating XR technology going forward. This means skyrocketing demand for VR/AR engineers, software developers, UX designers, and other associated roles.

In order to create a step-by-step approach for starting a career in VR/AR development, I sat down with Ollie Morland and Woodrow Proctor, two VR software engineers at Glimpse. I asked them about their professional journey toward XR development, their experience in the job market, and their current position at Glimpse. Together, we outlined the skills, choices, and pathways leading to a career as a VR/AR engineer.

To start, every developer needs to learn a coding language and a platform. Usually, these skills are tied to one another: each VR/AR device uses a particular platform, and each platform uses a particular coding language. The easiest way to start is by deciding what you want to do as a VR/AR engineer. Ollie, Woodrow, and I created a flowchart below which should help you get started.

The device you choose tells you which coding languages and platforms you should become fluent in. For example, if you're interested in developing AR apps for iPhones, you should learn Swift and download Xcode.

Now that you know what device, coding language, and platform you want to learn, the next step is deciding how you want to learn. The Glimpse Group employs dozens of VR/AR software engineers hailing from a range of professional backgrounds. Our engineers acquired their programming skills in different ways, all of which are perfectly acceptable to any VR/AR employer.

The most obvious way to learn is by getting a relevant college degree. A degree in computer science, programming, graphical design, or any other related field will provide you with the foundation you need to then specialize in VR or AR development. Some colleges such as NYU, Drexel University, and Syracuse University even offer specific VR, AR, and immersive media programs, ranging from ten week certification courses to full-fledged four-year degrees.

College degrees are the most conventional route toward an XR development career, but the tuition and time commitment required can form major barriers to entry. XR development bootcamps serve as a more affordable and expedient alternative. Non-university programs like XR Terra teach you the basics of XR development over a four to eight week course. XR Terra offers programs for varying levels of expertise, from novice coders looking for an introduction to more experienced developers looking to specialize their skills. These bootcamp programs are part-time and usually conducted in the evening, leaving plenty of room for a job or university courses during the daytime. Woodrow first started with XR Terra’s “VR Industry Bootcamp: Developer” program, and now he’s a full time VR developer at Glimpse.

Finally, there’s a third route that’s even more affordable – and more challenging – than a college degree or a bootcamp. You can simply learn by doing. This is how Ollie came to XR development: he had a semi-related degree in electrical engineering, but knew he had a penchant for computer programming. He downloaded SDKs and tinkered with software development in his free time, all while applying to any job at a VR/AR company, not necessarily just a developer job. As Ollie explained, “If you want to be a chef, but don’t have cooking experience, start washing dishes and learn through your surroundings.” While the autodidactic route is potentially the most challenging, if you can learn through osmosis and bootstrap your own development skills, you will come out the other end a well-rounded developer and an impressive job candidate.

But as we all know, getting hired isn’t just about having the right skillset. Building connections with businesses and individuals in the industry is also a crucial part of landing an XR development job. As you’re acquiring your development skills, try joining some of the many VR/AR communities online! Whether you’re reaching out to fellow developers for tips and tricks, chatting with XR enthusiasts on the forums, or messaging company reps on LinkedIn, integrating yourself into the world of VR/AR is essential for kickstarting your development career.

If you’re interested in a career in VR/AR, start off by deciding your specialty. Do you want to develop VR or AR programs? And for which device? From there, you’ll determine which coding language and platform you should become familiar with. There’s plenty of ways to do so, from conventional college programs to XR developer bootcamps to independent learning. Then you can start applying to internships and job openings at any of the several companies who are in need of XR developers. With valuable professional skills and an expanding job market, the future is bright for XR developers in 2022.

Interested in interning with The Glimpse Group as a VR/AR developer? Send a resume and cover letter to info@glimpsegroup.io. 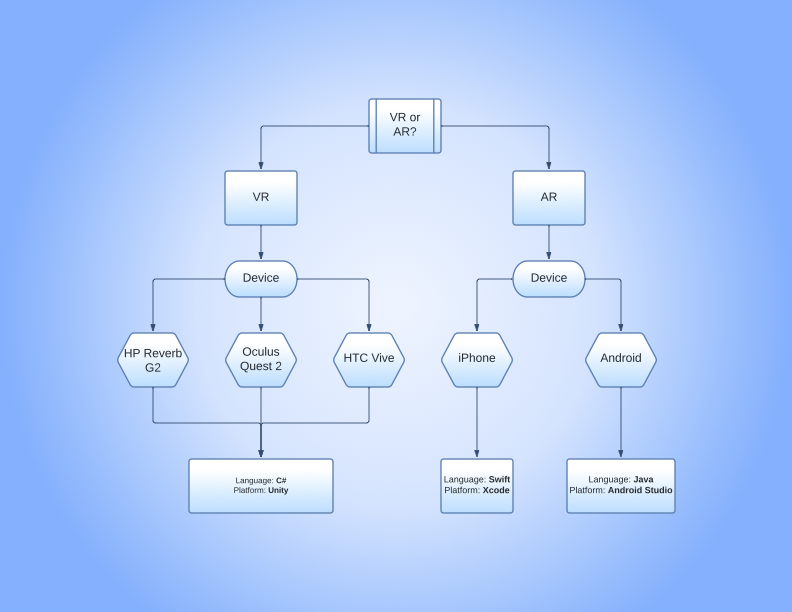 Cameron is the Content Writer/Editor at The Glimpse Group. As a former academic researcher in the humanities, he blends his outside perspective as a relative newcomer to tech with Glimpse's industry-leading expertise to demystify the world of VR, AR, and the metaverse.